2014 drawing to a close: What is happening in Sydney’s housing markets? – Pete Wargent

Property prices in Sydney have rebounded very strongly from a moderate downturn, up by around 17.5% since their trough and easily breaking new highs by some 10% through 2013.

It’s pretty much what I expected from the lower interest rate environment, as long-term blog readers will know. I believe that, whether we like it or not, due to changes in lifestyle and demographic shifts, home ownership rates in the New South Wales capital over time will likely slide.

Over the past 12 months, prices in Sydney are up by ~13.5% as compared to a paltry ~1.5% in Adelaide, with the rest of the major capital cities falling somewhere between the two extremes. 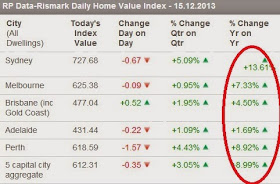 It’s my belief that you will never get a full understanding of our property markets from only sitting behind a desk and looking at charts (because you don’t see what is happening ‘on the ground’), and nor can you do so from only being active in the markets through buying properties (as you need to consider the macroeconomic environment and, for example, the strength of the labour markets).

This weekend, Sydney had the largest number of auctions ever recorded in the city at nearly 1,000 as vendors aim to cash in on elevated levels of buying interest. Preliminary clearance rates suggested around a 75% clearance rate on Saturday, although these can sometimes later be revised downwards.

For such a large number of properties going under the hammer each week, the auction market remains exceptionally strong, suggesting that the momentum seen in 2013 will likely continue into the new year.

There’s been a lot of talk about whether first homebuyers have been completely shut out of the market as the data appears to imply. There’s no question that with more than 50% of loans accounted for by investors, then correspondingly the first homebuyer numbers have likely dropped off.

Investor finance commitments are clearly becoming very high and are still rising according to the latest Australian Bureau of Statistics (ABS) figures, up by some 29% y/y, including another huge jump in the last month’s data.

Cameron Kusher of RP Data recently noted that the percentage of investors in the market is at the highest levels since since the most recent property boom in Sydney a decade ago.

So what did happen from late 2003 in Sydney? In short, prices fell a little, then were flat for a prolonged period of time, before at long last teeing off again in 2009. In income-adjusted terms, prices in Sydney are still below their peak of a decade ago, and thus it would be no surprise if capital growth continues through 2014 while interest rates are so low.

Higher entry prices make saving deposits tough in the absence of the ‘good old/bad old’ days of 100% LVR mortgages, and first homebuyers are frequently in competition with investors for the same medium-density property types, leading to the data showing that less than 10% of total finance commitments as relating to first-timers.

It’s certainly the case that the data is not capturing all first homebuyers, as has been well documented elsewhere. I’ve been pipped to the post more than once in recent months by first homebuyers, but these won’t show in the data for established dwellings in the absence of existing grants.

One point perhaps worthy of note is that the first homebuyers that I have seen have been significantly older than their equivalents from decades previous.

Realistically, however, anyone who has attended auctions in recent months will know how much investor interest there is. The market is still very buoyant and this is continuing to put upwards pressure on prices – undoubtedly it will be a tough environment for younger buyers who continue to focus on living close to the Central Business District (CBD) as opposed to looking further out.

There has been much said as to whether this trend of high investor activity is sustainable or otherwise. Bearish observers suggest that this is a potential ‘Minsky moment’ and the debt cycle will reverse.

Others feel that this is simply an extension of home ownership rates continuing to fall lower over time. In Sydney’s case, there are several potential factors which might support the market:

-limited supply – but only in certain suburbs (not, for example, in the inner south or around Broadway)

The Minsky theory speaks of income on leveraged assets failing to cover interest charges inevitably leading to a disorderly exiting of the asset class. But when will we see interest rate hikes to a cash rate of above 3.00%? The future is always uncertain of course, but the likely answer is: not for quite a while yet.

The next movement in interest rates could well even still be down to 2.25%. The low rates will in my view result in the Sydney property market momentum carrying through into 2014.

In the absence of a change to the tax system, investors currently appear more likely to ‘buy and hold’ – thus ‘clogging up’ the property markets – rather than dashing for the exits. 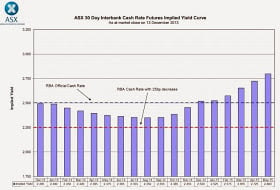 As for the economic outlook, inner Sydney is in the midst of a construction boom and the employment outlook for the state, while perhaps softening a touch, is clearly better than a couple of other notable cases. Unemployment rates by state from this month’s Labour Force data: 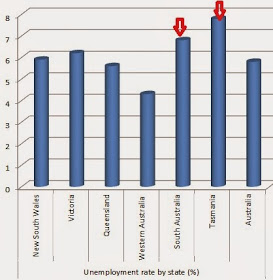 And 12 month jobs growth from the same data set: 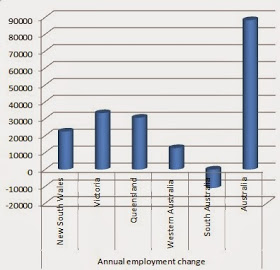 The economic term ‘moral hazard’ can be traced back for a few centuries. Widely used by English insurance companies, it once referred to the taking of risks by a party to a transaction due to the costs of the risk potentially being felt by another party. In particular, we will hear increasingly this term used in reference to debt following the subprime crisis.

Clearly in the case of subprime loans there was an incentive for borrowers take undue risks in the form of non-recourse loans, because the potential costs of default could in part be borne by another party.

But the global debt crisis runs wider than only the increased levels of private or household debt.

We are more than half a decade on from the onset of the global financial crisis and yet much of the associated pain has not yet been felt – instead it has been pushed around rather like pieces on a checkers board. Heavily indebted nations remain heavily indebted. Private debt levels in countries like Australia and others remain elevated.

In the UK, in the evident absence of any smarter ideas, the government has simply decided to re-inflate the housing market using tools such as Funding for Lending and the Help to Buy scheme. Great for first homebuyers who jump on board now, perhaps, but what of the future?

As an owner of investment properties in the UK, it would be easy to view this as an excellent idea, but taking a more objective stance, it appears that few lessons have been learned from previous boom/bust cycles.

With ithe Bank of England base rate stuck at the effective zero-bound, a new property bubble could well be on the horizon (well…we already have one in London). Sit back and watch prices boom once again over the next two years as the herd mentality kicks in.

Developed nations appear to be addicted to public and private debt, and particularly the associated wealth effect of appreciating house prices.

With all this going on, why would people invest in residential property at all? The long answer would be convoluted and refer to the psychology of investment and the asset class volatility. The short answer is that not all properties will perform in the same manner.

We’ve just lived through a half-decade long UK property slump where many towns and cities away from London and the south-east saw prices fall by a quarter, or in some cases even more than 40%, resulting in a “great divide”.

The divergence becomes self-fulfilling as dedicated ‘capital growth’ investors look at cities like London and Cambridge, where demand is high and appropriate supply low – they saw no need to sell because prices did not fall materially at all. Indeed, prices continued on to break new highs in 2013, while many ‘yield chasing’ investors in other parts of the UK remain ‘under water’ or in negative equity.

Reserve Bank of Australia (RBA) Governor Glenn Stevens noted in an interview with the Australian Financial Review this week, how younger people Down Under today are tending towards living in medium density dwellings close to the Central Business Districts, rather than aiming for detached housing in outer suburbs.

This will contribute to an imbalance on our property markets, creating “iniquitous cones of wealth” around the centres of our capital cities just as we have seen in countries elsewhere.

It can barely help matters that people spread the ridiculous myth that it is ‘too dangerous’ to live in the west of the city. Sydney has indeed experienced an upswing in shooting crime, yet single-digit shooting deaths this year across a city of nearly 4.6 million people is hardly a gangster’s paradise (or, say, New York, where incidentally shooting crime is actually falling, and recorded murders have fallen dramatically from a high of over 2,200 in 1990).

The straight reality is that in Sydney we are doing everything later than we used to. As an immigrant Aussie citizen, I wouldn’t make a bad case study: didn’t marry until my 30s, still don’t have children, still don’t own a principal place of residence (though I own investment properties). Hopefully, I might even die later too.

In fact, if it was up to me, I’d be quite happy renting forever, but alas it seems likely that I will have to fold in 2014 and buy a house due to the perils of increasing matrimonial pressures.

Over coffee, I’ve listened to Brad Caldwell-Eyles, principal of 1st City, discuss this dynamic: in a parallel Sydney world many of us might happily rent, but over time the the emotional pressures grow to establish a base, and thus we often end up paying handsomely to live in what we deem to be a desirable suburb.

I also had a coffee or two this week with share investment guru Peter Thornhill and he lamented having experienced the same pressures. He bought a house with his wife in Woollahra in despair having failed to find anything equating to a reasonable commercial-style tenancy or lease. This forces prices upwards in the desirable suburbs.

As for the Sydney residential construction boom, I covered off here why, although a boom in construction can impact prices on a localised or suburb level, in large cities such as London and Sydney where the percentage of new builds in relation to existing housing stock necessarily remains low, the concept that even a massive increase in new builds could in itself materially impact city-wide prices is not plausible.

Clearly, however, this is not the case in localised cases or in small regional centres and towns, and thus due care should be taken by buyers in these areas.

Finally, one other trend which we’ll doubtless see continuing in 2014 is the misguided notion that people in Australia today have life tougher than post-war immigrants or other forebears.

The truth is that living standards in Australia today are exceptionally high in global and historical terms. The angst, of course, is as ever driven by inequality…and perception becomes reality.

Where are the Top Millionaire Rows in NSW?

Are you paying more than your fair share of tax?